One doesn’t have to be a historian or a wanna-be archeologist to be incredibly impressed by this spectacular display of Native American Rock Art. Some of the art is thought to be 10,000 years old! Simply standing in the presence of literally hundreds of these ancient petroglyphs made me feel that, although I am just a tiny bleep on human-kind’s timeline, I was somehow sharing in our collective past.

I took a mini road trip to Little Petroglyph Canyon, which contains one of the best preserved displays of rock art in the United States. Located on the Naval Air Weapons Station China Lake near Ridgecrest, tours of the canyon are monitored and restricted, which has certainly helped protect these petroglyphs from vandalism. The Navy Base is also the location of several other canyons where these petroglyphs exist, collectively known as Coso Rock Art District, a National Historic Landmark. There are thought to be over 100,000 (!) images either pecked or carved into the basalt rock – animals (bighorn sheep, deer, coyotes, mountain lions, birds), humans (stick figure and clothed with robes and head-dresses or medicine bags), tools and weapons (mainly the atlatl and dart), as well as abstract images (dots, circles, lines and curves). 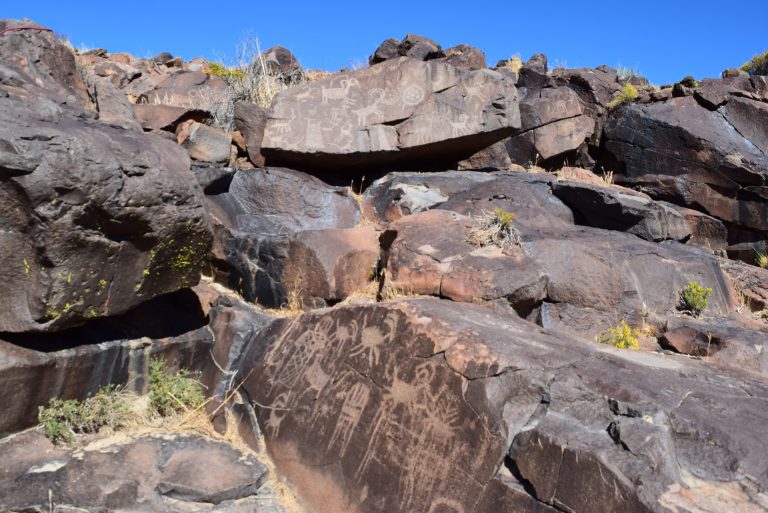 Tours are given to Little Petroglyph Canyon only in the fall and spring, either through the Maturango Museum in Ridgecrest or by contacting the Navy Base’s Public Relations office. Tours must be arranged ahead of time as there is a lot of paperwork required by the Navy Base. This is one adventure that cannot be spontaneous!

Since Ridgecrest itself is not the most exciting place and I wasn’t interested in fighting Los Angeles traffic on Friday evening, I left my home at 3 am on Saturday morning and arrived at the museum in plenty of time for the 6:30 am sign-in and orientation.

By about 8 am, our group was ready to caravan onto the base, accompanied by some of the wonderful docents from the museum. We passed inspection at the Naval Base gates and then we were on our way – a 45 mile drive into the back country of the base, which is as large as the state of Delaware!

No pictures were allowed until we got to the canyon, otherwise I would have taken pictures of the wild horses, burros and deer that I saw along the way, along with a beautiful Joshua Tree/Yucca forest and remnants of the old mining days. I also would have snapped a couple of pictures of “target practice,” too! Who knew that the base has only about 200 military personnel and another 3,000 civilian personnel – mostly scientists and engineers? The contrast of the “future-looking” testing that seems to be going on there and the ancient petroglyphs is an interesting juxtaposition.

Once we got to the canyon, which is located at 5,000 feet elevation, we were chilled to the bone, but told by the docents that we were lucky, as it can easily get to over 100 degrees, even in September. It didn’t take long to warm up and, as we descended into the canyon, we were more protected against the wind. 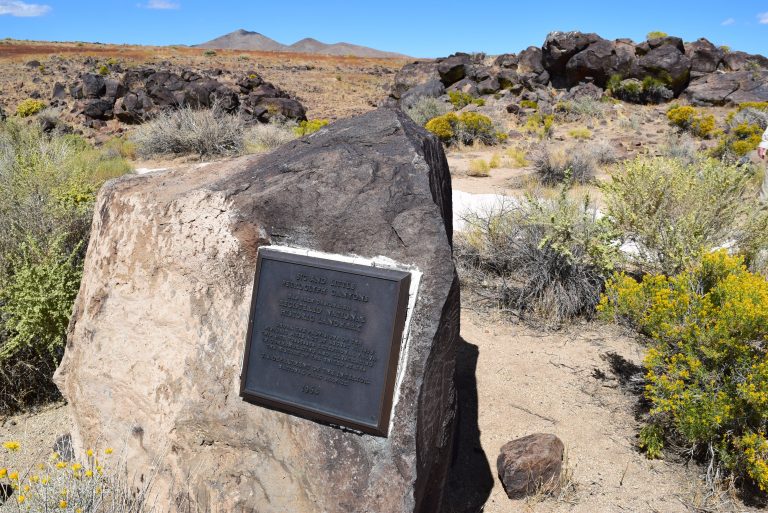 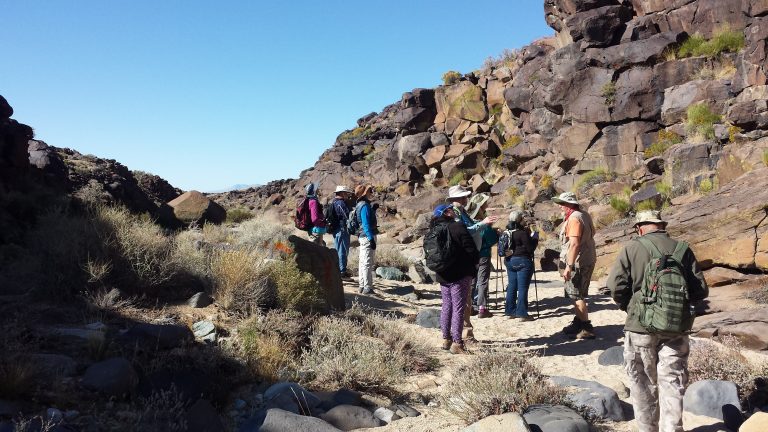 Our group wandered about three-quarters of the way into the 3-mile canyon, which would narrow and widen then narrow again along the way. At a couple points, the canyon is only 6 – 8 feet wide. In some parts, steep walls rise about 60 feet. There are a couple of tricky drops which require a little boulder hopping (or, for me, scooting on my butt). There had been some recent rain, so the boulder hopping was complicated by trying to avoid a couple of little ponds. The museum docents were very patient with all of our various fitness levels. 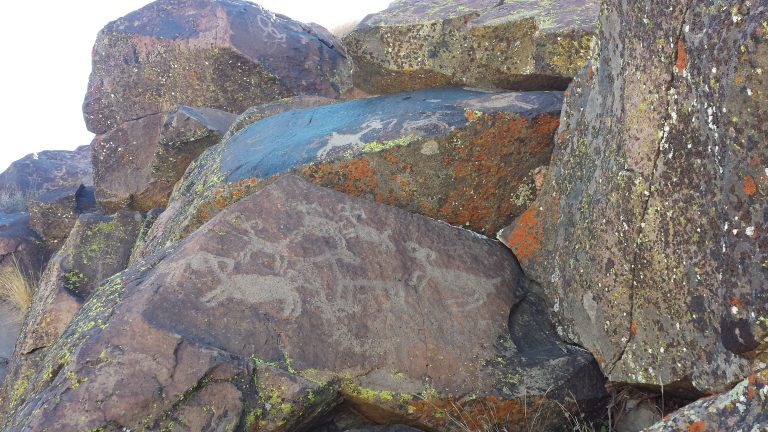 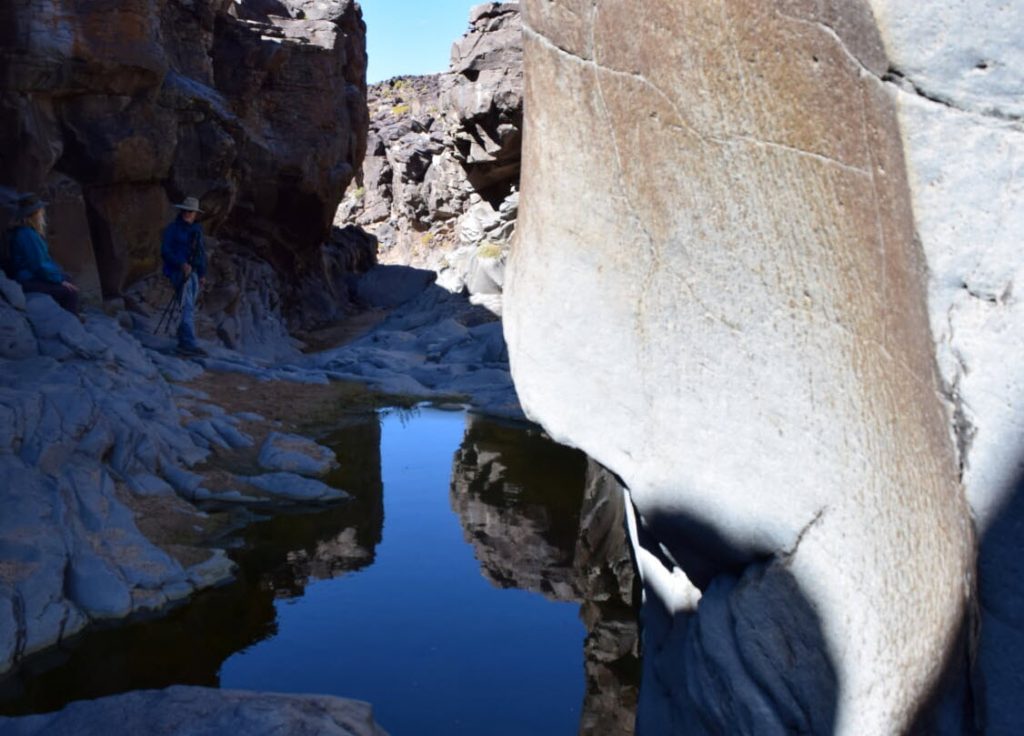 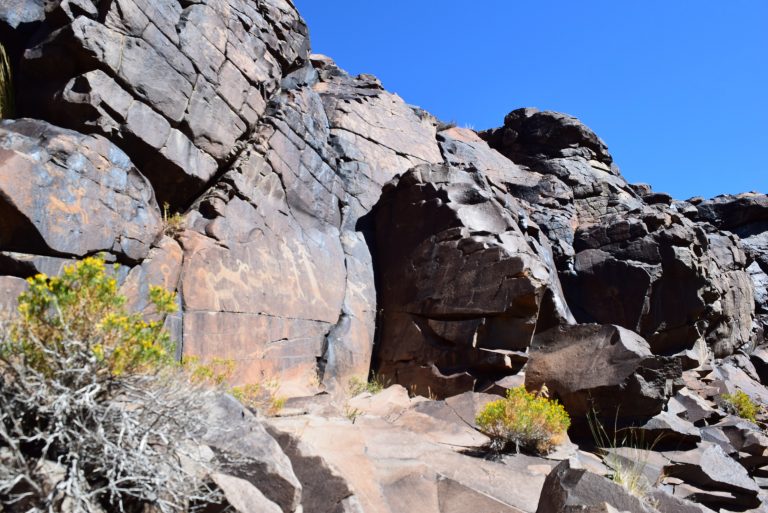 There was a lot of evidence of wild horses in the canyon and the holes they “dug” with their hooves in the sand to get to water just below the surface. Although we had seen a couple groups of wild horses on the drive in, none were seen in the canyon; I’m sure they were steering clear of us! The wild horses are descendants of horses abandoned after the demise of mining in the area in the late 1800’s.

We ate lunch in the canyon, surrounded by rock art that we had almost stopped noticing because there was so much of it. No one knows for sure which Native American group decorated the canyon with their art or, for that matter, why. There is general agreement that the Paiute-Shoshone peoples have been in the region at least 600 – 800 years, but disagreement about the people who would have been creating this art prior to that time 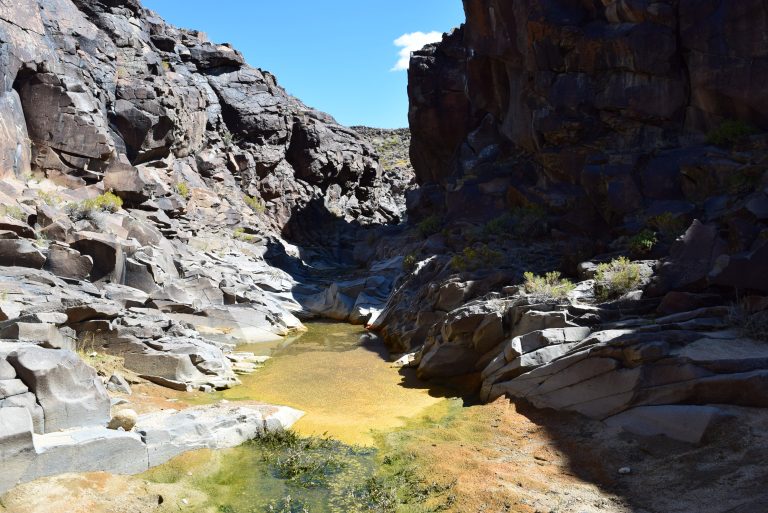 As we sat for awhile and eventually made our way up and out of the canyon, we could only guess at the meaning of the art and wonder who might have put it there. Equally mysterious is why they chose to do so much of it there. It’s almost poetic that we will probably never really know . . . 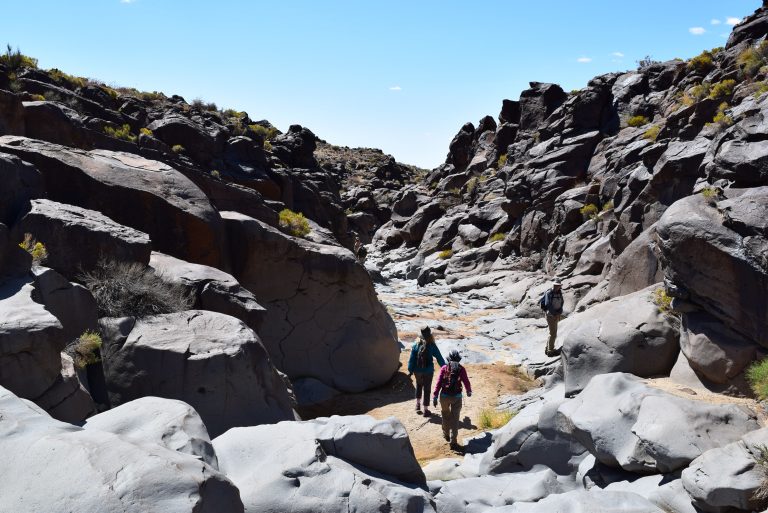 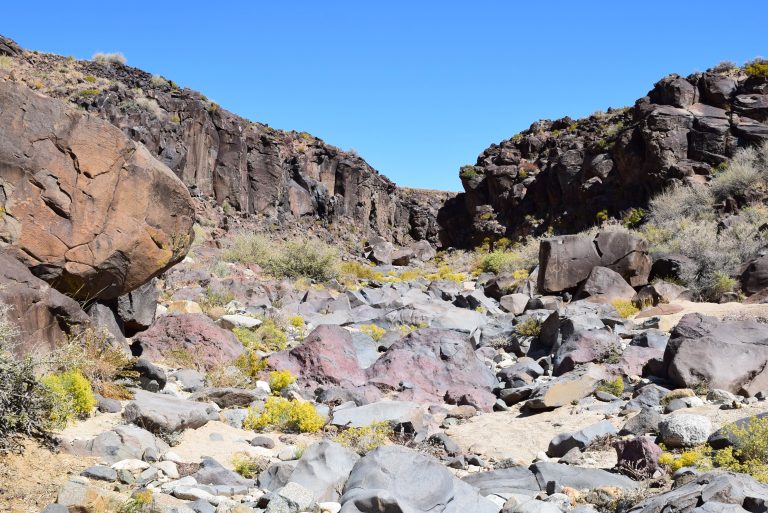 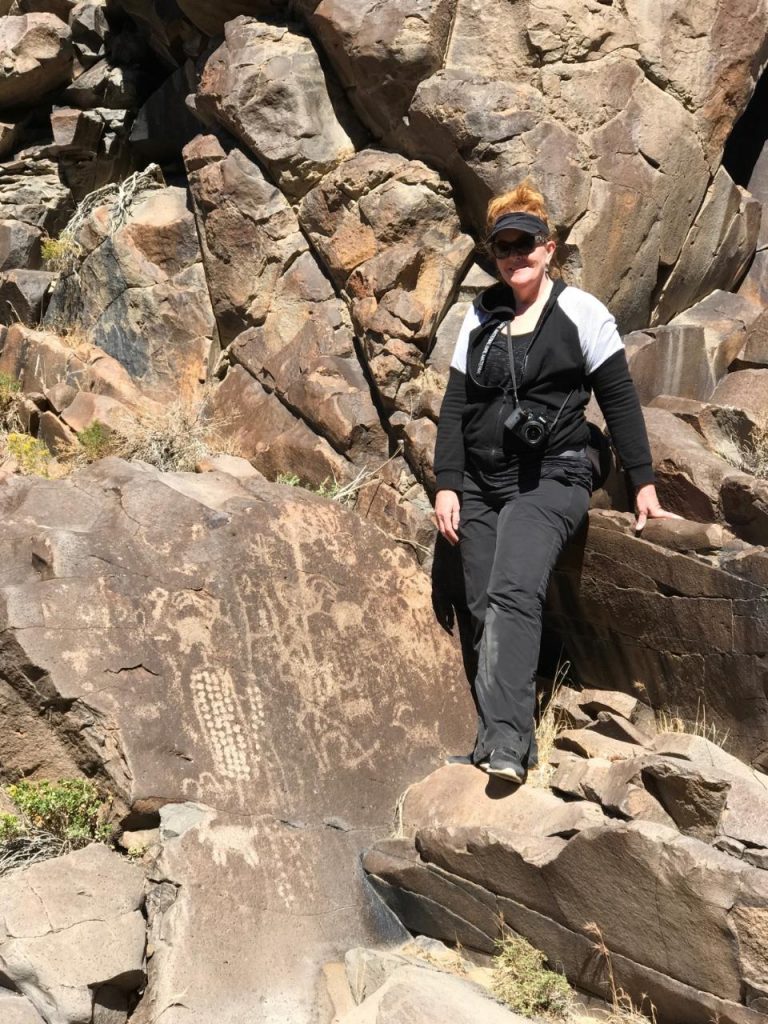 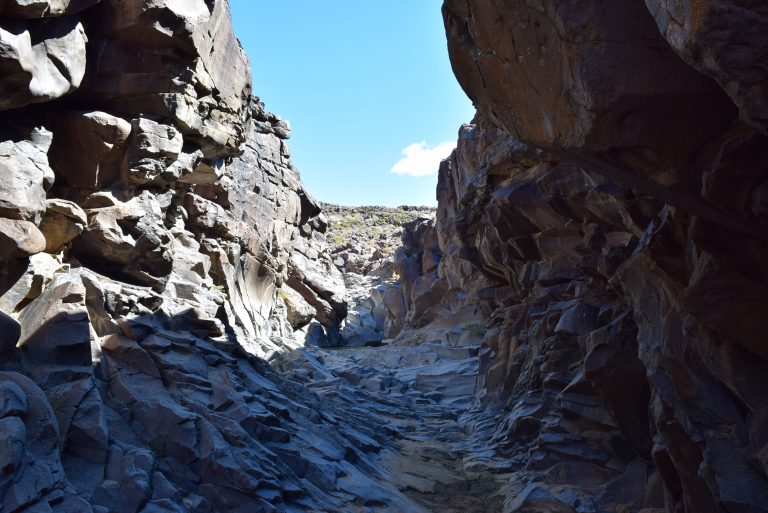 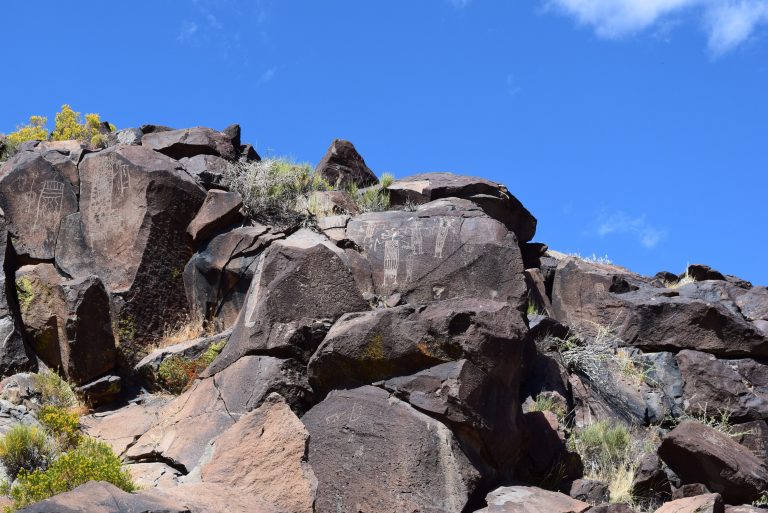 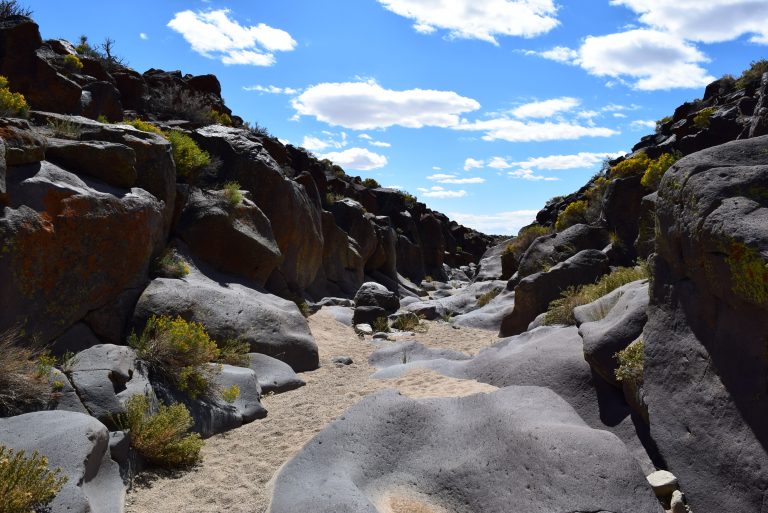