What a great way to spend a day – sea, sun – and no agenda whatsoever! A mere 25 miles or so off the coast of southern California lies an island that feels a world away, like Key West, Florida – only drier and less tropical. That island is Santa Catalina island, commonly known to southern California locals as just Catalina. It was a wonderful getaway with our boys who were in town with their significant others.

Catalina is part of the eight-island archipelago, called Channel Islands, that extends for 160 miles from north (Santa Barbara County) to the south (Orange County). Five of the islands and the waters surrounding them are included in the Channel Islands National Park. There are many species of animals, insects and plants that are endemic to all the islands; causing the Channel Islands to be considered something like the Galapagos Islands of Ecuador. Marine life abounds in the crystal clear blue waters surrounding the islands. It is a popular destination for snorkeling.

The islands were first settled by the Chumash and Tongva Native Americans 13,000 years ago but were displaced by Europeans in the early 1800’s. Today, two of the islands serve a U.S. military training grounds, weapons test sites and as a strategic defensive location, particularly notable during World War II.

Catalina is the only island with a significant human population which reside mostly in the resort city of Avalon and the small hamlet of Two Harbors. The island is 22 miles long and 8 miles across at its greatest width. A narrow isthmus joins the island about two thirds northwest from the most southern end of the island. The isthmus is about half a mile wide and is the location of Two Harbors. 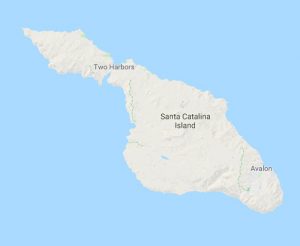 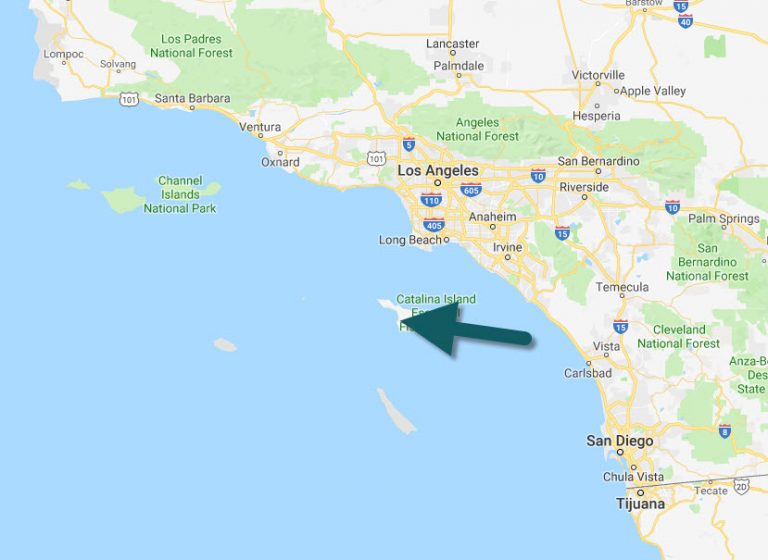 About 5,000 people live on the island – 90 percent of those in Avalon. While there are cars and vehicles on the island, most residents get around with golf carts as there is about a 14-year waiting list to bring a car onto the island.

You can get to Catalina with a personal boat, of course, but for those of us without that luxury, we get there via ferry – from San Pedro, Long Beach, Newport Beach (summers only) or Dana Point. We took the Catalina Express from Long Beach. The round-trip ticket to Avalon was somewhat pricey ($145); I’m not sure only eight hours in Catalina was worth it – I’d recommend a longer stay.

We took an early morning boat. Commuters as well as groups toting bags and luggage were lined up at the dock. The boat was busy, but not packed, and we found good window seats. The waters were tranquil and glassy as we moved out of Long Beach – slipping past the Queen Mary and the port of Long Beach on a beautiful, clear southern California autumn morning.. 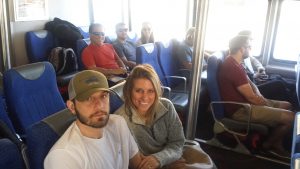 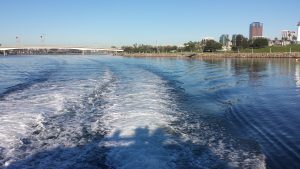 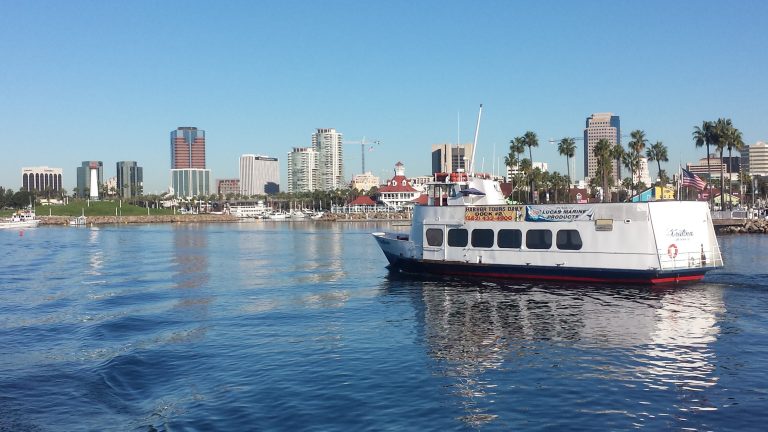 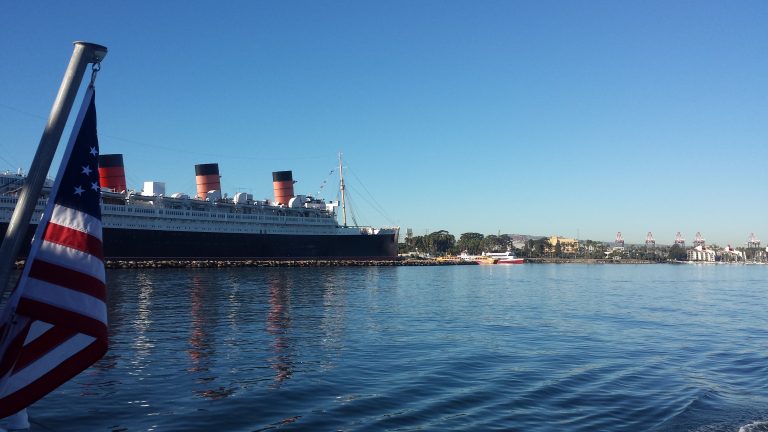 About 45 minutes into the ride, the boat slowed down to a crawl and we noticed that we were in the middle of a pod of dolphins! There were dozens surrounding the boat – leaping joyfully around us. It was a delightful highlight that I will never forget!

After another 45 minutes or so, we docked at Avalon. With absolutely no agenda at all- we wandered the early morning streets in the tiny town. 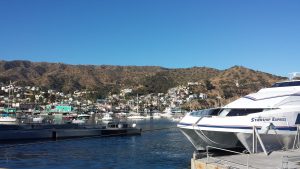 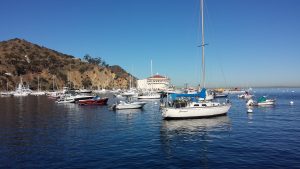 We ate breakfast at Original Jack’s Country Kitchen on Catalina Avenue. Our rather salty waitress had definitely been around the block a couple times, but she took good care of us and the food was tasty and filling. 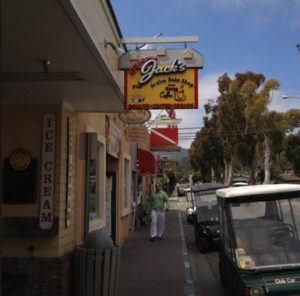 We coninued past the town, making a stop at the headquarters of the Catalina Island Conservancy, where we learned about the native flora and fauna and about the 165 miles of trails that traverse the island. Had we been prepared and had the weather not been so hot, we would have been interested in hiking a portion of the 37-mile Trans Catalina Trail.

But we were not that energetic that day, so we wandered past the Conservancy and to the Wrigley Memorial and Botanical Gardens. William Wrigley, Jr., the founder of the gum empire, became owner of the island in 1919. While his family deeded 88% of the island to the Catalina Island Conservancy in 1988, his descendants still own the remainder. Interestingly, the island was the spring training headquarters of the Chicago Cubs, where they practiced until 1951.

The gardens are interesting enough, with many different cacti and succulents as well as plants native to Catalina, but our goal was to climb atop the Wrigley Memorial, the final resting place of Wrigley himself –  his grave is all the way at the top. The memorial’s construction began in 1933 with a focus on using materials from the island itself. The view from the pinnacle down toward the water is breathtaking. It was also a cool place to rest a little before we walked back down. If it had not been as hot as it was, we would have gone up the hill past the memorial to the Garden to Sky trail – which led another 2.5 miles up the hill to a ridge where one can see the ocean on both sides of the island. 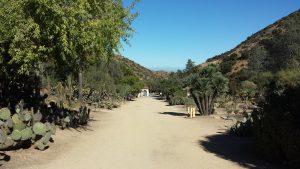 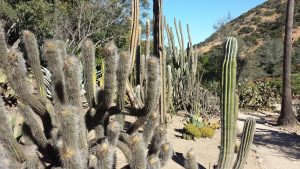 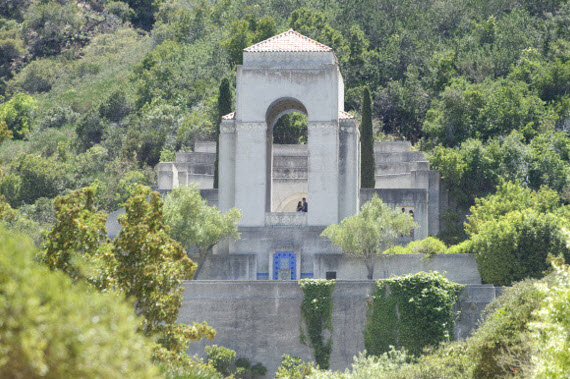 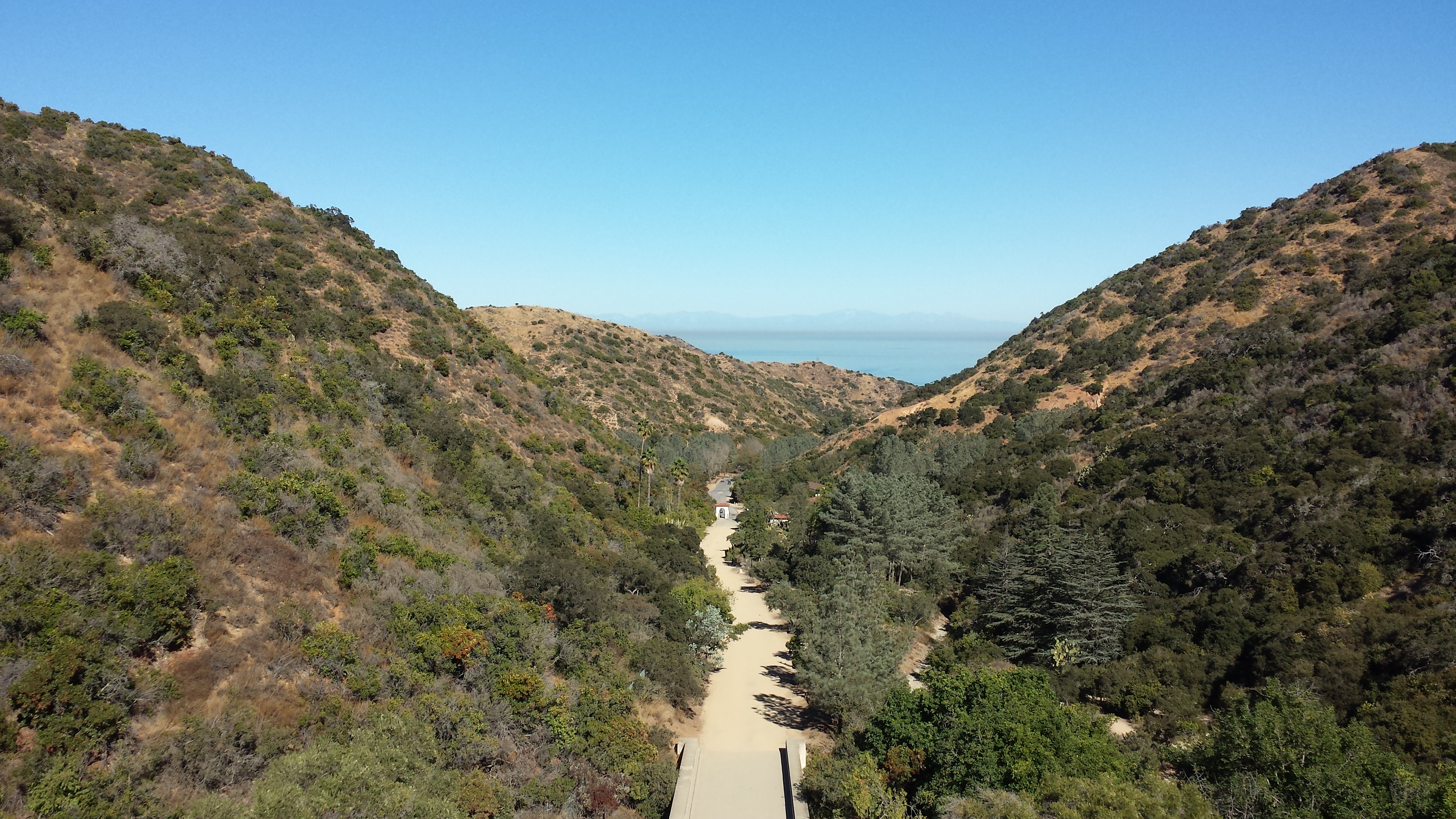 We were lucky enough to catch Avalon’s public transit, the Garibaldi Public Bus, at the botanical garden’s entrance for a $2 lift back into town. It was hot!

We enjoyed checking out the little shops and such along the beachfront. By now, more people were up and about and more ferries had arrived and the bars and restaurants were filling up. 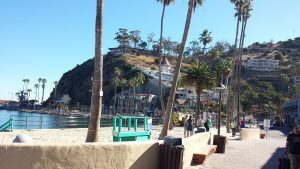 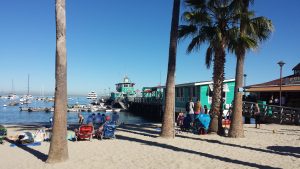 We chose the Bluewater Grill (306 Crescent Ave.) and had to wait for a seat out on the deck. 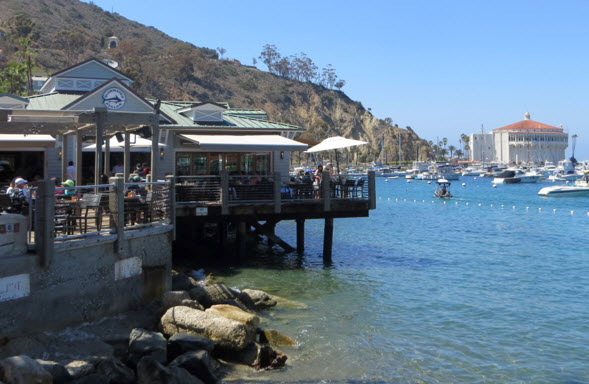 It was worth the wait. The view was amazing and the ambiance was relaxing. We sat for a long while on the deck and enjoyed multiple beers, along with oysters and other fresh seafood.

After that long “lunch,” we meandered along the shore toward the Avalon Casino, which is not a casino in the sense of gambling, but a gathering place, in the Italian sense of the word. The grand historical building, a symbol of the island, encompasses a grand art deco ballroom, as well as theaters and meeting rooms. Tours are available for those interested. 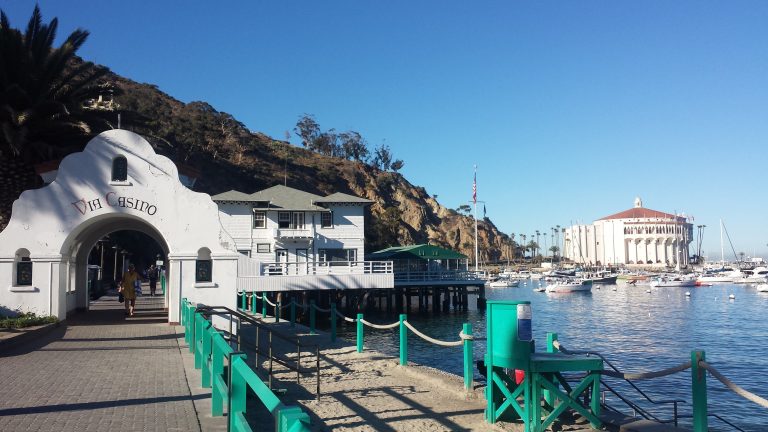 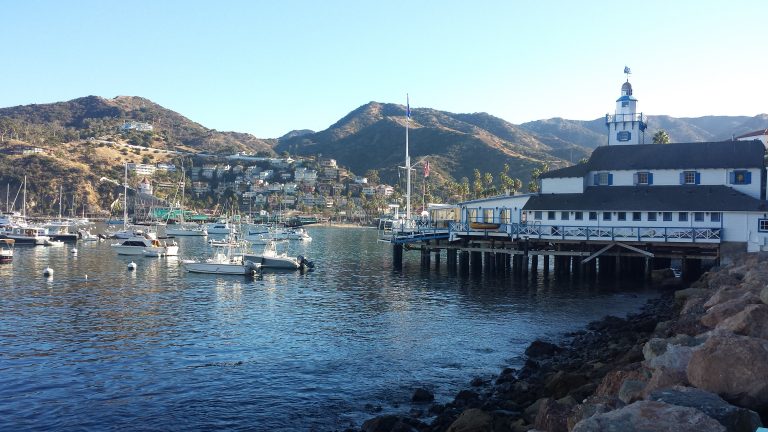 We continued further along the shore, towards a lovely cove that contains the Descanso Beach Club. It is one of the last private beaches in California and offers high-end amenities such as private cabanas, chaise lounges and an attentive staff. The pristine Pacific water laps on the shore, inviting sunbathers in for a swim. 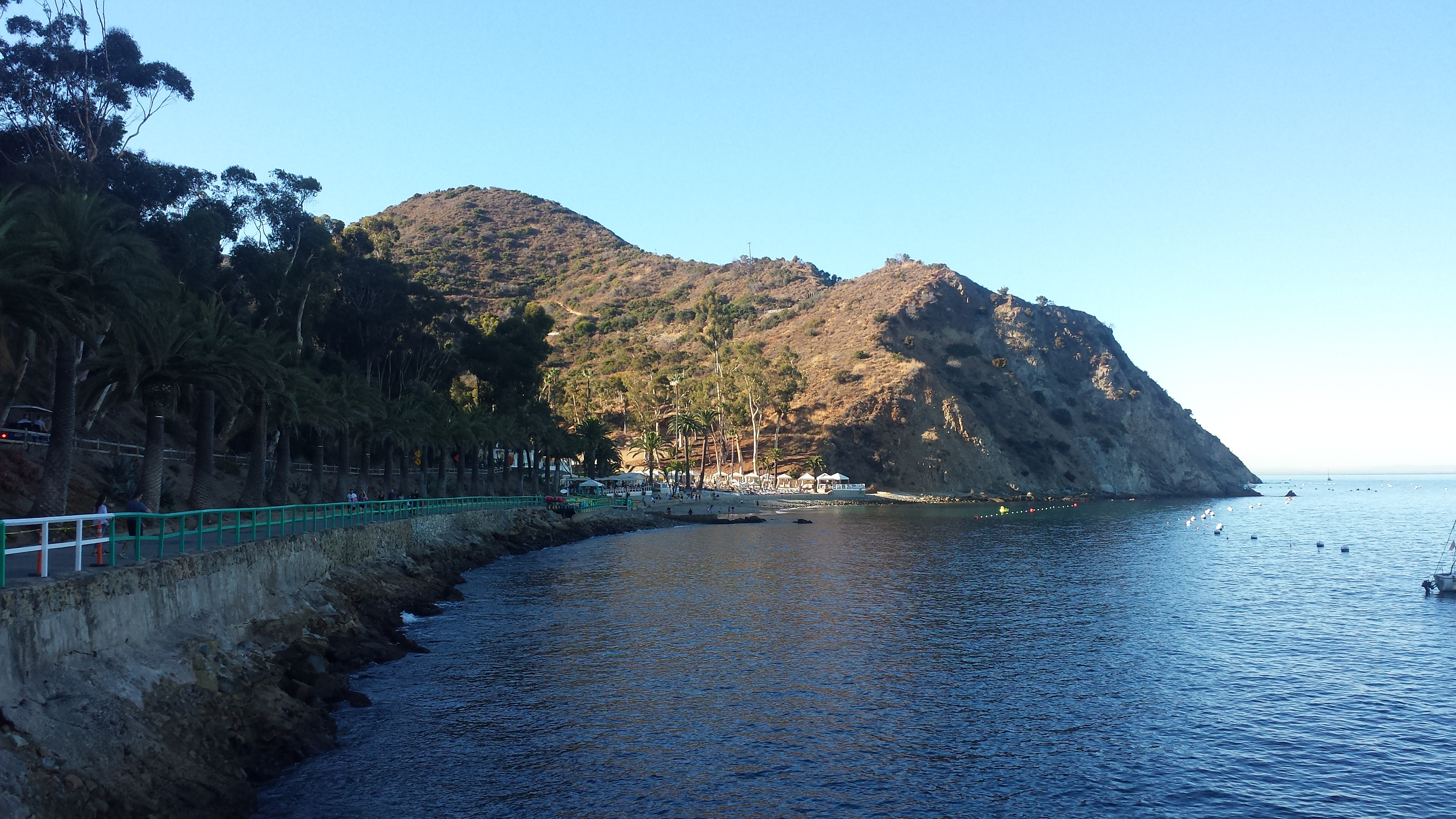 Had we been more adventurous, we could have taken advantage of glass-bottom boat tours, zip line eco tours, miniature golf or an island jeep tour. There are also boat rentals, paddle boarding and parasailing.

After a slow stroll back to the ferry slip, we waited in line to get back on the Catalina Express, enjoying ice cream along the way. This time, we opted to sit on the outside top deck. Despite the intense heat of the day, it was quite windy and actually cold on the boat trip back – thanks in part, I think, to the off-shore wind on that day that the ferry was fighting against as it headed back to the mainland. Little by little, we watched about half the outside top deck passengers descend down into more protected quarters, but we persevered. 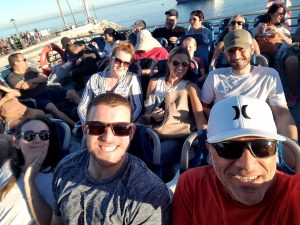 Our reward was the spectacular sunset. No dolphin pod this time, but we arrived back in Long Beach tired but happy after our eight hours on Catalina. 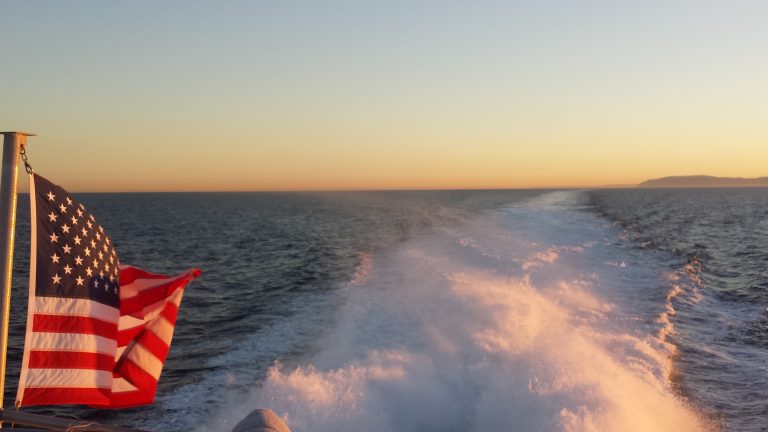 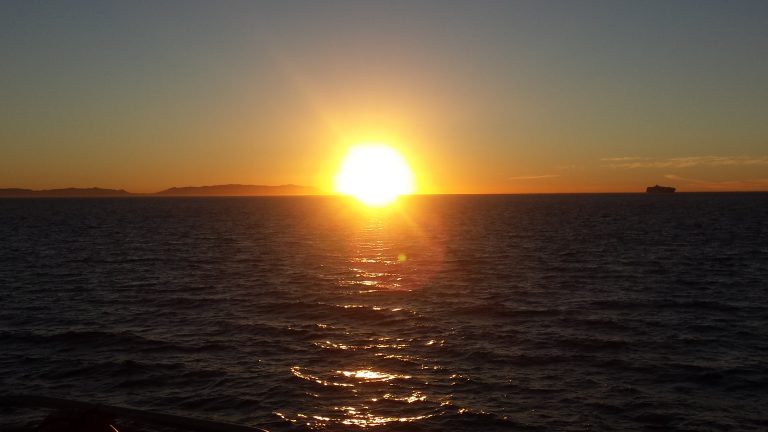